Our land is our exclusive identity

Every drop of wine encapsulates not only local history and the nature of the landscape, but also all the sacrifices and dedication of the people who created it.
Masottina comes from Veneto, the home of unique territories whose identity our winery strives to exalt and preserve, in a region where vines are the characteristic element that identify the landscape.
We can thank Venice and its expansion and commercial influence if wines from Veneto are renowned beyond the borders of its territory.

The story of Masottina is written in the Prosecco hills of Conegliano and Valdobbiadene, in 2019 listed as a UNESCO World Heritage Site, established as one of the 56 most beautiful places in Italy and one of the 1121 most spectacular places in the world.
This acknowledgement was achieved after carefully examining the area’s history, economy, sociology and particularly local viticulture through the geomorphology and evolutionary dynamics of its use of the soil. A fundamental contribution was made by aesthetics and literature, but above all the history of art, which thanks to Cima di Conegliano has made it possible to discover the historic traces of the places depicted in his works of art.

The Prosecco hills of Conegliano Valdobbiadene include 15 municipalities. The hill area starts in the north west with Valdobbiadene and ends in the south east with Conegliano, and is acknowledged as ‘unique’ by UNESCO for three main characteristics: the geomorphological aspect, use of embankments and the mosaic-like landscape.

The checkerboard landscape comprises forests, small human settlements and the vineyards that produce Conegliano Valdobbiadene Prosecco Superiore DOCG.
This is a territory with an ingrained vocation for winegrowing, due to a microclimate influenced by its location between the sea and the Prealps, which ensures a mild climate with an annual average temperature of 12.3°C and the constant ventilation essential for growing healthy grapes.
The soil is the second distinctive element of this territory. Its origins go way back to when the beds of the shallow seas and lakes rose up to form the hills. Some were remodelled by the Dolomite glaciers as they swept different sediments downhill.

A landscape where many types of terrain co-exist, but also where the hills have different formations, at times gentle as in the area of Conegliano, and at times much steeper and entirely south facing as in the area of Valdobbiadene.
All the combinations of slopes, exposure and soils make each micro-zone different, giving rise to the biodiversity of the 43 Rive, home to the best Prosecco Superiore.

In 2009, when Conegliano Valdobbiadene Prosecco Superiore was elevated to DOCG, a new indication was introduced – ‘Rive’, which identifies on the label the municipality or hamlet where the grapes are grown.
Our ‘Rive’ wines represent the essence of the territory, they are produced with hand-picked grapes exclusively from a single locality. Ogliano is one of the 43 rive where Terre di Ogliano and the Dal Bianco family cultivate almost 20% of the entire vine planted area.

The Ogliano landscape comprises very delicate views of vineyards punctuated by woods, with hills topped with churches and their bell towers.

The uniqueness of this terroir also stems from its orogeny; it is the only Conegliano Valdobbiadene area with a glacial origin and this means morenic soil rich and fertile and water easily penetrates to ensure a natural reserve that’s useful in dry periods.

The glacial origins of Ogliano are easily observed from the top of the hills; the morainic amphitheatre created by the Piave glaciar is evident, as well as the Fadalto valley, particularly important for Ogliano’s unique climate.
The area benefits from the fresh air currents that almost always sweep down from the Alps during the night to produce significant temperature excursion that has a positive effect on the grapes’ quality, healthiness and aroma.
Wines from Ogliano are well-rounded, intense and persistent. The distinctive ‘signature’ of this terroir is hints of ripe fruit and spices. 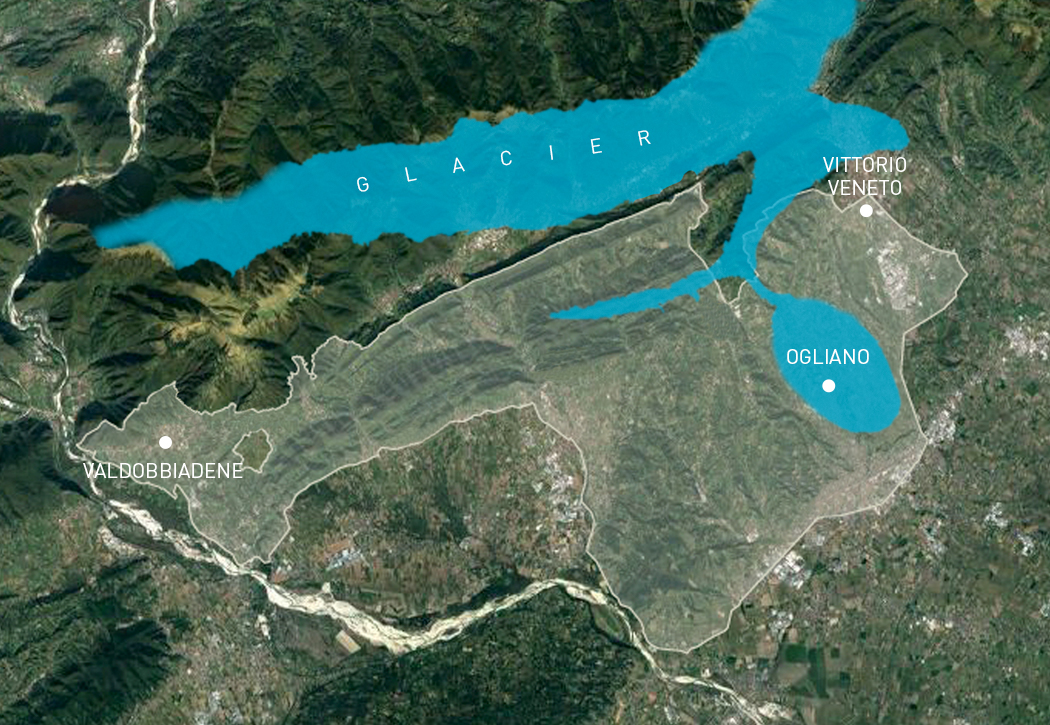 Even the Supreme Poet celebrated Treviso with its Sile and Cagnan, which together with Botteniga and Siletto are canals that flow through the streets of the historic city centre, creating some of the most attractive views within this walled city. The most typical of these canals are the Buranelli, which take their name from Burano, the island from which the fishmongers arrived to sell fish in the marketplace, still standing today.
Treviso is a city rich in history and culture, boasting many historic mansions, colonnades and monuments within its walls. It flourished under the Venetian Serenissima, also due to the River Sile, which was essential for transporting timber from the Cansiglio forests.

“…and where the Sile and Cagnan mate,
One lordeth it, and goes with head erect,
For trapping whom even now the net is made”.

The city walls and gates were built for the city’s protection in 1509 under the dominion of the Venetian Serenissima Republic, to the plans of Giovanni Monsignori, an engineer also known as Fra’ Giocondo. There were around twelve medieval gates, no longer standing, but the three built in the sixteenth century are extant: Porta San Tommaso, Porta Santi Quaranta and Porta Altinia.
Treviso and its surroundings are inextricably linked to farming; vines have been cultivated since time immemorial and many indigenous varieties hail from here.
The city has played a crucial role in the development of many products, including Prosecco wine. That’s why the Prosecco DOC Treviso indication has been created as part of the Prosecco DOC designation to identify wines for which the grapes have been harvested, vinified and bottled within the province of Treviso.
The most widely cultivated variety is Glera, used to make Prosecco, together with Bianchetta Trevigiana, Verdiso and Perera (ancient varieties grown in the province of Treviso), Chardonnay, Pinot Blanc, Pinot Gris and Pinot Noir (white vinified).